Each year I try to do something to give back to the blog community and celebrate art and the inspiration it provides. June marks the 12th Anniversary of my blog: Art is Truth. This year, I’ll be posting guest articles from readers each week. I hope you’ll enjoy reading a post from my friend, Tara, below! I know you’ll want to hop on over to her blog to read more of her thoughts on art: http://tarachoate.com/

Inspiration has a near mythical relevance in the life of an artist. It’s a fairly standard question to artists at art events and artists talk about it amongst themselves. The dictionary defines inspiration as two similar, but distinct things:

Is inspiration the process? Or the idea itself? Read my story and leave a comment with your thoughts!

I first met Ruth when she was giving a workshop. At the time, she was working mainly on figurative paintings. I remember her working on a particularly lovely painting of a dancing couple and using a lovely warm brown and turquoise. Shortly after this, Ruth turned to abstracts, searching for the same feelings as she got with her figures. Her “Down on the Farm” series has been particularly evocative. Her posts keep me motivated to try new things and serve as a counterbalance to my desire for everything to have a point. Ruth has always seemed to enjoy the process of painting, finding her inspiration within the idea for the individual piece. Alternatively, I tend to get focused on the end result.

For example, in January 2018, I tried (unsuccessfully) to learn a new technique. 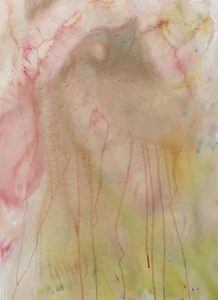 After the paint dried, I decided the painting looked like a T-rex, and so drew this. 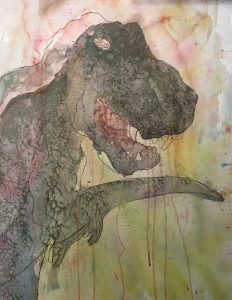 And then, for two years, I pondered the painting. When I had been doing internet research on what a T-Rex looks like, I had been reminded that some scientists believe dinosaurs had feathers. Some of the online drawings had various dinosaurs with stripes and other interesting features. The whole thing made me wonder what my own, personal dinosaur would look like.

I had a vague idea of making the dinosaur’s eye have an elaborate makeup scheme, adding some feathers, maybe a racing stripe? Somehow, from there, the idea morphed into dinosaur jewelry. But this whole train of thought seemed so weird, that the painting just sat.

Then, one day in December 2019, I had a terrible day. I came home just sick of everything. Why couldn’t I just fit in with the world? I looked at my T-Rex and suddenly FELT like I must finish it. At that moment, I didn’t care if ruined it, I just needed to express the ridiculousness of a T-Rex all made up for a party. Feather, eye make-up, and jewelry didn’t feel like too much. That T-Rex was me. One set of realities trapped into trying to be something else.

Over the next few weeks, “I Feel Pretty” was finished. I posted her on Facebook, where the painting was suggested. I showed her to a friend, who suggested a feather boa. 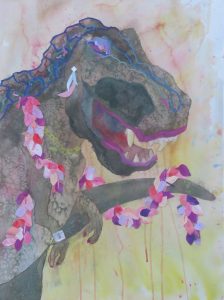 And I took her to critique group who made the final, finishing suggestions. 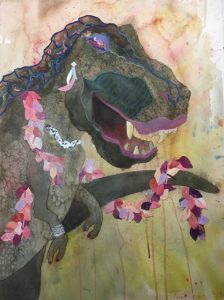 Over the course of all this finishing, so many people made a comment like “this is me” or “I feel just like this”. When I determined to finish this painting on that very bad day, it was me feeling like I was the weirdest, most awful person in the world. And when I showed it to the world, everyone else seemed to say, “yeah, me too.”

Ruth would have started out trying to make a painting so people would feel her thoughts; for me, the feeling was a bi-product having the painting get finished.

So, where does inspiration fit into this?

My inspiration is closely tied to a certain feeling that I don’t care if it doesn’t work out; I trust in my own abilities to make it work. Many of my more successful paintings have a significant element of unpredictability to them; I stopped thinking and let the paint do its thing.

Many painters, in today’s artistic world, claim to be “intuitive” painters. I have taken this to mean that some painters are planners whereas others start out with only the most general of ideas. While I am no planner, I hesitate to put myself in the intuitive group because Ruth more clearly defines that idea; she doesn’t know where she will end up, but she knows what she wants.

The careful crafting of an idea is something that eludes me, but also inspires me.

I returned to painting as an adult in 2006; in 2009, I took a workshop with Ruth. It was on abstraction and it was the first workshop I took that wasn’t directly tied to how to apply paint to paper. There are two things I remember vividly from that workshop. The first was an introduction to value sketches. While I didn’t get the concept at the time, I remember being blown away by the idea that you could take a sketch of something and reverse values. Just because something was dark in the reference photo, didn’t mean it had to stay that way. 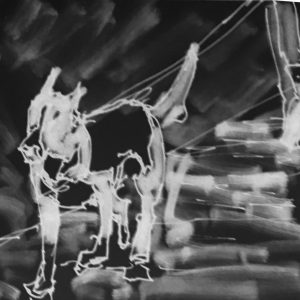 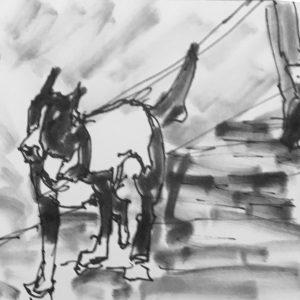 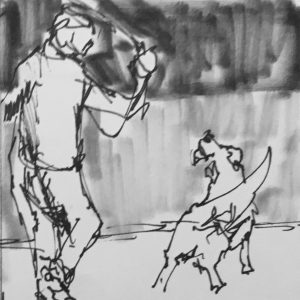 The second was my relationship to colors. Ruth had us make a grid where we wrote down four smells, four touches or textures, and four sounds. Then we had to “describe” these items using a mixture of cool and warm colors.

In the process, I realized that cool colors tend to sooth me, whereas warm colors make me anxious. There was one square in particular that Ruth said she would be interested in seeing an interpretation of; it was a square about the scent of my grandmother. I still haven’t done that painting. 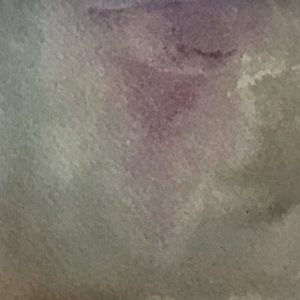 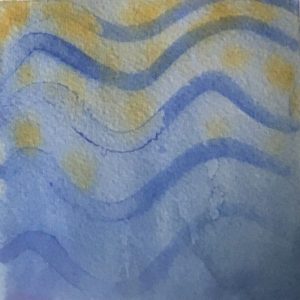 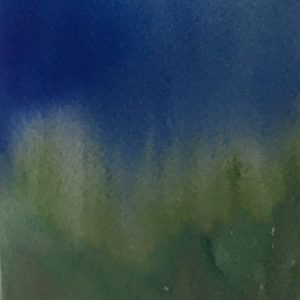 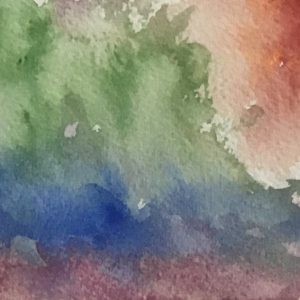 I haven’t done that painting because I feel like it needs more than I can currently give it. I don’t yet trust my abilities enough. But I’ll step off that cliff someday, and I’ll have Ruth to thank for the inspiration.

Thanks so much for the endorsement, Tara! If you’d like to receive first notice of new workshop announcements, click here to join my email list! And if you’d like to read more on the topic of inspiration, check out my post from way back in 2011: https://rutharmitage.com/Inspiration/ 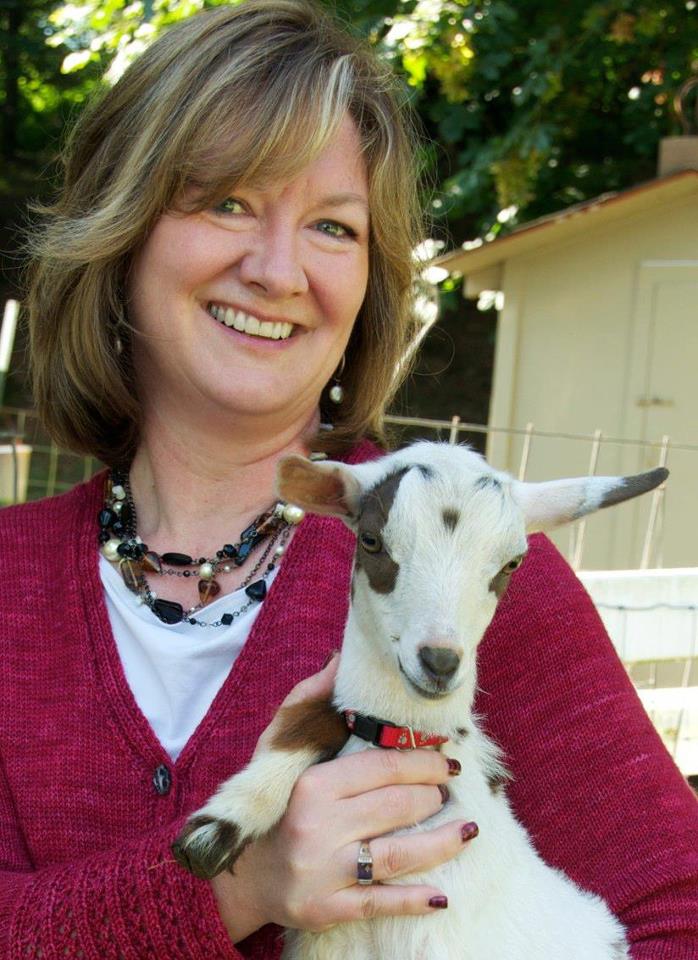